Biotium, a leading supplier and inventor of fluorescent tools for life science research, announces the release of the next-generation Gel-Bright™ Laser Diode Gel Illuminator.  In partnership with Biotium, light and optics instrumentation company OMEC Medical developed the gel illuminator to offer a better alternative to UV and LED-based gel imaging.

The Gel-Bright™ Laser Diode Gel Illuminator contains 12 laser diodes that are positioned at an optimal angle for consistent and uniform illumination of the gel. Safety glasses are not required because the amount of laser light that could enter the eye’s pupil is below the CDRH limits. In addition, an adjustable multi-hinged amber filter provides optimal signal-to-noise and can be moved into a lower position for gel imaging, or a higher position for easy access when excising bands. With convenience in mind, the gel illuminator also has a compact and portable design for easy transport and minimizing occupied space on benchtops.

Each purchase of a Gel-Bright™ Laser Diode Gel Illuminator will include a free sample of GelRed® Agarose LE and GelGreen® Agarose LE. These are safer and more convenient pre-coated agarose formats that remove the extra step of adding dye to your agarose. A Gel-Bright™ Imaging Hood, which is a fitted enclosure for convenient imaging with your cell phone or tablet, will be offered as an optional accessory at a later date. Please visit the product page to learn more about the new Gel-Bright™ Laser Diode Gel Illuminator. 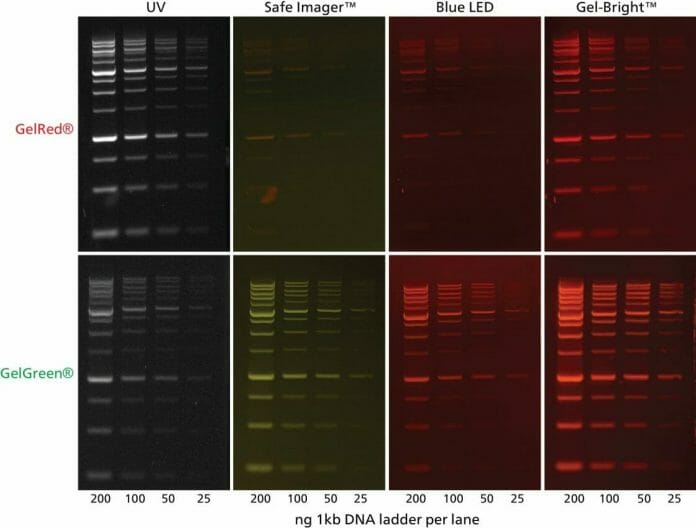 Other News of Interest