“The additional data we presented today at ERA from the ongoing phase 1/2 study of BION-1301 further demonstrates its disease-modifying potential in IgAN by generating durable reductions in mechanistic biomarkers and corresponding impressive proteinuria reductions within three months of initiating treatment,” said Eric Dobmeier, president and chief executive officer of Chinook Therapeutics. “IgAN is a serious progressive disease for which there are limited treatment options, and the data from this trial will inform the design of a phase 3 trial of BION-1301 for patients with IgAN that we plan to initiate in 2023.”

MO212 – Updated Interim Results of a Phase 1/2 Study to Investigate the Safety, Tolerability, Pharmacokinetics, Pharmacodynamics and Clinical Activity of BION-1301 in Patients with IgA Nephropathy

Additional data was presented from Cohort 1 in Part 3 of the ongoing phase 1/2 multi-center trial (see www.clinicaltrials.gov, identifier NCT03945318) evaluating the safety, tolerability, pharmacokinetics (PK), pharmacodynamics (PD) and initial clinical responses of open-label BION-1301 treatment in patients with IgAN. Patients in Cohort 1 initially received an intravenous (IV) dose of 450 mg of BION-1301 every two weeks. After at least 24 weeks of IV dosing, all Cohort 1 patients transitioned to SC therapy at 600 mg every two weeks for up to a total treatment duration of two years.

Key highlights from the mini oral presentation include the following:

Median baseline 24-hour urine protein excretion for the patients enrolled in Cohort 1 was 1.22 g/day, with a range of 0.74 – 6.47 g/day, representing a population of patients with IgAN at high risk of kidney disease progression.

All eight patients currently on trial have transitioned to SC administration with a mean SC treatment duration of 22 weeks (range five to 28 weeks).

As of the May 6, 2022 data cutoff, BION-1301 has been well-tolerated, with no serious adverse events or treatment discontinuations due to adverse events.
Three patients experienced mild (grade 1) treatment-related AEs, including one injection site reaction.
Four patients experienced mild (grade 1) infections, considered not related to treatment. To date, no anti-drug antibodies have been observed in patients.

BION-1301 durably reduced serum IgA and IgM levels, and to a lesser extent, IgG levels in all patients. BION-1301 demonstrated mean IgA and IgM reductions at steady-state of greater than 65%, while mean IgG levels were reduced by only 30-40%.
In one patient, IgG level fell below the study-defined threshold, necessitating protocol-mandated withholding of BION-1301. There have been no infections reported in this patient. The protocol did not include entry criteria for minimum IgG levels.

BION-1301 treatment resulted in steady-state reductions in Gd-IgA1 in the range of 70-80%, demonstrating depletion of the pathogenic IgA variant, and establishing the potentially disease-modifying mechanism of BION-1301 by directly targeting Hit 1 in the multi-hit pathogenesis of IgAN.

Cohort 2 in Part 3 of this study is currently enrolling additional patients with IgAN who are receiving a SC dose of 600 mg of BION-1301 every two weeks. Initial data from Cohort 2 is expected in the second half of 2022. Part 3 also includes the option for a third cohort of patients to receive a SC dose of BION-1301 at a dose and schedule to be determined based on data from Cohorts 1 and 2. Data generated from this phase 1/2 study will inform the design of a phase 3 trial of BION-1301 for patients with IgAN that Chinook plans to initiate in 2023. 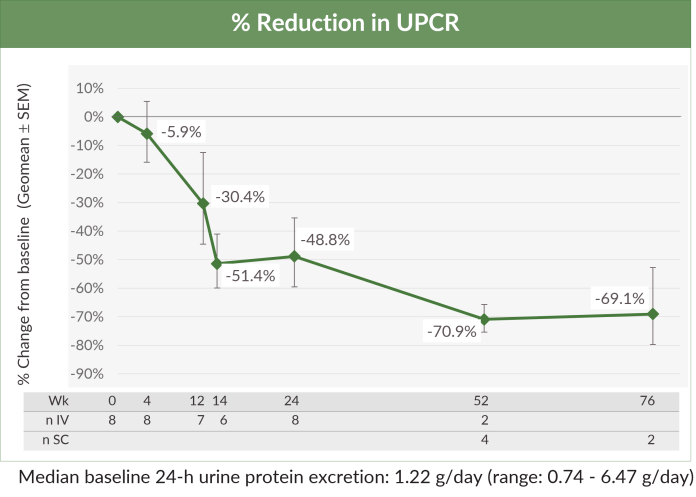 Mesangial cell activation is considered the initiating intra-renal event in the pathogenesis of IgAN and occurs in response to the deposition of pathogenic Gd-IgA1-containing immune complexes. Mesangial cell activation is characterized by increased cellular proliferation and overproduction of inflammatory cytokines and chemokines as well as extracellular matrix. This activation results in cellular crosstalk that leads to podocyte injury and proteinuria and ultimately to tubulointerstitial inflammation and fibrosis, resulting in kidney function loss. To assess the role of the endothelin A (ETA) receptor in mesangial cell activation, subsequent proteinuria and the transcriptional networks that drive disease progression, the effect of atrasentan was investigated in a rat model of mesangioproliferative glomerulonephritis (MPGN) as a surrogate for IgAN.

Induction of MPGN in rats was characterized by glomerular and tubulointerstitial injury histologically, marked proteinuria, and a transcriptional down‑regulation of metabolism gene networks and up-regulation of networks associated with proliferation, inflammation and fibrosis, consistent with the hallmark genesets dysregulated in the glomeruli of IgAN patients. Atrasentan treatment attenuated the mesangial cell response, glomerular injury and secondary tubulointerstitial injury observed histologically, and prevented proteinuria. Atrasentan down-regulated intra-renal proliferative, inflammatory and fibrotic transcriptional networks and restored metabolism networks, reversing hallmark gene set enrichments that are also observed in the glomerular transcriptome of IgAN patients. This study suggests an important role of the ETA receptor in mesangial cell activation, subsequent proteinuria and activation of pathogenic proliferative, inflammatory and fibrotic intra-renal transcriptional networks in MPGN. This further supports the therapeutic potential of atrasentan, a selective ETA receptor antagonist, to attenuate mesangial cell activation, proteinuria and pathogenic intra-renal signaling in MPGNs such as IgAN.

MO207 – A Phase 1/2, Multicenter Study to Investigate the Safety, Tolerability, Pharmacokinetics and Pharmacodynamics of BION-1301 in Healthy Volunteers and Adults with IgA Nephropathy

A trial-in-progress overview for the ongoing phase 1/2 study of BION-1301 was delivered as a mini-oral presentation at the 59th ERA Congress 2022.

All three presentations can be found in the Scientific Publications section of Chinook’s website.