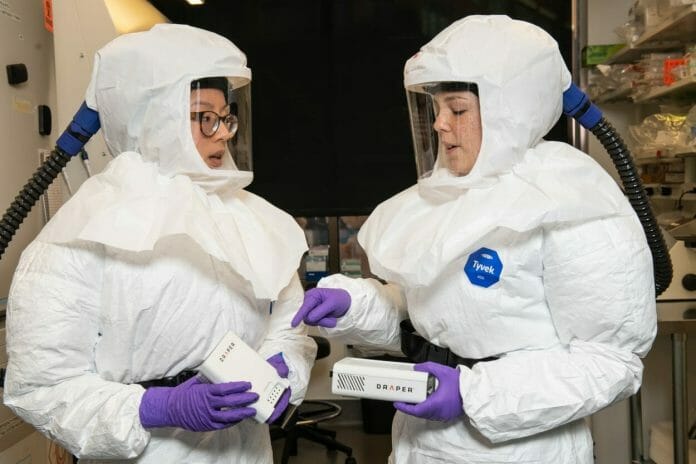 Warfighters operate in a strategic environment that has expanded to include a complex set of legacy, enhanced and emerging biological and chemical threats. In response, the Department of Defense (DoD) is exploring new ways to develop and deploy medical countermeasures (MCMs) more rapidly to the warfighter.

Now, a new study by Draper advances critical capabilities for developing MCMs, including therapeutics and vaccines, to be used against emerging diseases, pathogens and toxins. The study, published in the online preprint server bioRxiv, documents the first organ-on-chip model of the human lung capable of accurately assessing the efficacy of SARS-CoV-2 therapeutics in a high-throughput system.

The study highlights the utility of using 3-D, complex human tissue models rather than existing techniques such as animal testing or overly simplistic human or animal cell culture models that do not accurately mimic infection or drug responses in humans, according to Christine Fisher, a co-author of the paper.

Ashley Gard, corresponding author of the study, says that human tissue models that are sustained for weeks in a high-throughput, sensor-instrumented, 96-well dynamic microenvironment device can enable researchers to investigate multiple experimental conditions and obtain rapid and statistically significant results as they screen and evaluate therapies.

Controlling for age and sex, the scientists seeded PREDICT96-ALI with tissues from healthy human donors, exposed the lung-on-a-chip tissue models to the live SARS-CoV-2 virus in a Biosafety Level 3 lab and treated the organ models with one of three FDA-approved antiviral therapeutics, as well as known ineffective drug controls, for a holistic comparison to clinical outcomes. Together, the device and the lung-on-a-chip tissue model are called the PREDICT96-ALI (air-liquid-interface) platform.

Draper’s PREDICT96 organ-on-a-chip platform is currently being used by Draper and its customers and partners to develop and validate individual tissue models of the liver, kidney, vascular, gingival, gastrointestinal and lung organs and to evaluate immune-oncology approaches.

“The PREDICT96 platform has a promising future. It can be easily adapted to assess the effects on the body from a wide range of pathogens that require BSL-3 high-containment labs. We envision it will be used to screen and assess novel therapeutics and future vaccine technologies. Unique among organ-on-chip systems, PREDICT96 can work with living donor cells, which means it will be used to evaluate how pathogens and toxins affect different patient populations,” said Roger Odegard, senior program manager, National Security/Biosecurity Programs, Draper.

Using organ-on-chip models for MCM development brings other benefits, according to the DoD. It can help validate safety and efficacy in support of human trials, thereby reducing developmental risk and cost, and allow the Joint Force to rapidly respond to new biological threat exposures. It does so by developing validated prototypes and generating clinical and supporting nonclinical safety, tolerability and toxicity data for candidate treatments. BARDA concluded similarly, saying organ-on-chip systems can be used as “preliminary efficacy screens for MCM candidates.”

“Draper is here to facilitate the development and availability of MCMs to support the unique needs of American military personnel. We are dedicated to bringing advanced technologies and therapies to the armed services,” said Jonathan Cash, senior program manager, National Security/Warfighter Systems, Draper.

The PREDICT96-ALI findings are based on research by Draper principal investigators Gard, Fisher, Jeffrey Borenstein and others.