Optinose, (NASDAQ: OPTN), a pharmaceutical company focused on patients treated by ear, nose and throat (ENT) and allergy specialists, today announced results of a new nationwide survey on chronic nasal congestion, its impact on daily activities, and awareness of nasal polyps as a possible cause.

Nasal polyps are non-cancerous growths that occur with chronic inflammation high and deep in the nasal passages and lead to persistent symptoms like congestion, runny nose and recurrent sinus infections. 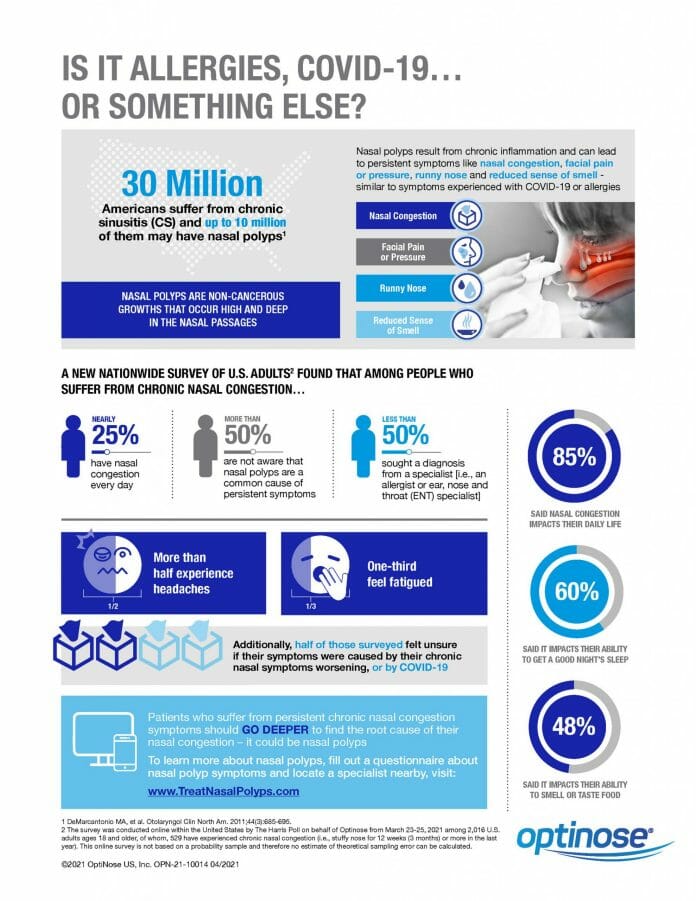 “Nasal polyps affect up to an estimated 10 million Americans and are particularly common in people who also have allergies, recurring sinus infections or asthma,” said Neal Jain, M.D., a board-certified allergist and immunologist. “Despite their high prevalence, nasal polyps are largely underdiagnosed and as the survey showed, most people with chronic congestion don’t know that nasal polyps deep in the nose might be causing their symptoms. I frequently see patients who are frustrated with persistent symptoms despite using conventional nasal steroid sprays that you can get over the counter or as a generic prescription. Because there are other treatments available from your doctor that can shrink or even eliminate nasal polyps, I encourage patients to talk to a healthcare specialist to take a deeper look at what might be causing their nasal congestion.”

“Persistent nasal symptoms can make people miserable and have a serious negative impact on both functioning and quality of life,” said Ramy Mahmoud, M.D., President of Optinose. “Nasal polyps and the associated inflammation occur high and deep in the nose. XHANCE is the only FDA-approved medication for nasal polyps that uses an Exhalation Delivery System to deliver medicine high and deep in the nose to reach and treat the condition where it originates.”

About the Survey The survey was conducted online within the United States by The Harris Poll on behalf of Optinose from March 23-25, 2021 among 2,016 U.S. adults ages 18 and older, of whom, 529 have experienced chronic nasal congestion (i.e., stuffy nose for 12 weeks (3 months) or more in the last year). This online survey is not based on a probability sample and therefore no estimate of theoretical sampling error can be calculated.