Achieving dispersion liquids with high concentrations that are 100 to 1,000 times that of existing products with expected applications in optical devices such as optical displays, optical sensing, and biosensors

1 Gold shell nanoparticle: This is a particle that forms a gold shell with a thickness in the order of nanometers on the surface of a core particle, which can be a colloid of inorganic materials, metals, or polymers. Various optical responses, different from pure gold nanoparticles, are exhibited depending on the shell thickness, core size, and core material.

2 Surface plasmon resonance: This is a phenomenon where the vibrations of free electrons in metals on the surface of metal nanoparticles resonate with incident light. The brilliant colors shown by gold shell nanoparticles are due to this phenomenon.

This product is designed to cover the particle surface—such as that of silica—with an extremely thin gold shell that has a thickness of approximately 10 nm. It exhibits strong surface plasmon resonance2. Additionally, by using the high dispersion stability in water and polar solvents, it is possible to prepare dispersion liquids with high concentrations that are 100 to 1,000 times that of gold nanoparticles currently being sold on the market.

The overall size of gold shell nanoparticles can be controlled within a range of 80 nm to 250 nm, allowing them to be given a wide variety of optical characteristics. This is especially true for colloids with particle diameters several hundred nm prepared in high concentrations. They are easier to integrate or structure three-dimensionally, such as into colloid crystals, and can be expected to be applied to various optical materials. 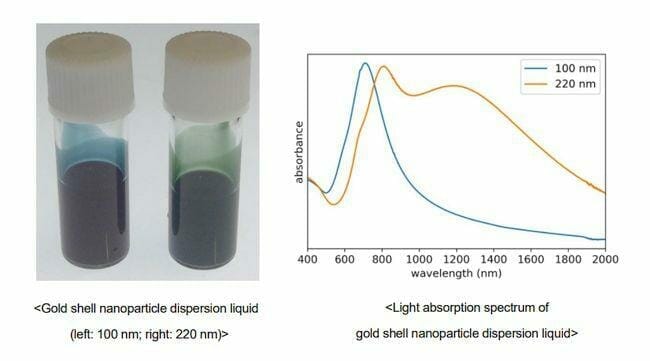 Gold nanoshell with a thickness of 10 nm

The surface plasmon resonance exhibited by gold shell nanoparticles becomes more efficient in absorbing incident light, the thinner the shell. Compared to existing products on the market, this product achieves an extremely thin shell thickness of less than 10 nm. This allows the energy of incident light to be absorbed efficiently and also contributes toward dispersion stability as the relative mass of the overall particles becomes lighter. 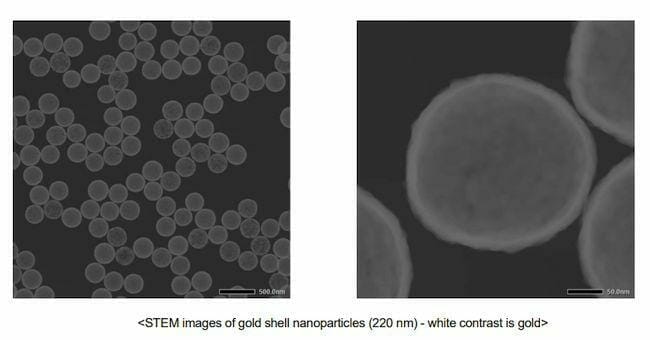 Normally, gold nanoparticles with diameters of several hundred nm tend to autoagglutinate and precipitate as the particle concentration increases. This product can be dispersed stably in water and polar organic solvents, such as alcohol, as the particle surface is appropriately protected by a protective agent. Particles protected by the protective agent can be prepared with a weight ratio of 20% or higher, allowing use in processes that require highly-concentrated particle dispersion liquids. In addition, gold nanoshell dispersion liquids dispersed in organic solvents have excellent quick-drying properties and can also be coated on materials of various shapes.

This time, TANAKA Kikinzoku Kogyo has designed gold shell nanoparticles with surface plasmon resonance close to the wavelength of SERS excitation light, confirming that it is possible to produce SERS substrates with dense hotspots by simply drying highly-concentrated dispersion liquids. 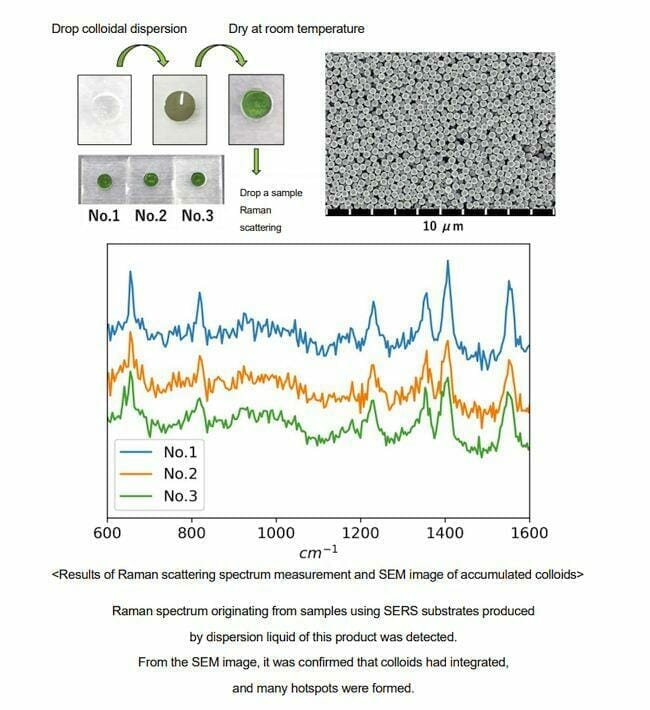 Due to the aforementioned characteristics, this product can be expected to be used as an optical material that responds to light from visible to near-infrared regions, including colloid crystals, surface-enhanced Raman scattering, and photothermal conversion materials. Applications to optical devices are also expected, including optical displays and optical sensing that require high resolutions using liquid crystals, plasmonic nanoantennas, and biosensors, such as those used in cancer tests.

TANAKA Kikinzoku Kogyo plans to sequentially respond individually to requests for samples of this product.